To Secure That Coveted Government Job!

Make Your Balcony A Paradise

Some pregnancy advice that you cannot afford to ignore

Goa is a major part of India. It is located in the western coast of the nation and is one of the premier tourist destinations in India. In fact, it is best known for tourism and is home to a mass of infinite tourist attractions. Visit the state to explore all its attractions and for accommodation choose from best Goa hotels.

Goa is a small state located in India’s west region. In fact, it is the smallest state in the country and is home to a friendly population which is also the fourth smallest populous in the country. It is one of the states that were colonized and then ruled by the Portuguese. The Portuguese came to the state as merchants but soon conquered  the state. Their reign in the state lasted for about 450 years, while their home Portugal was ruled by the Spanish. It was them who basically made the state. They brought the state into prominence, made it one of the largest and busiest ports, and introduced the city to modernity. It was in year 1961 when the government of India annexed Goa from the Portuguese and then declared it a state. Thus, making Goa one of the youngest states in India.

The capital of Goa is Panaji, which is today the home to the political headquarters and the headquarters of law and order. It is also one of the major commerce centres of the state and is a significant hub of education. However, Vasco da Gama is the largest city in Goa. The city is often referred as “Vasco” and as is apparent is named after the famous Portuguese explorer Vasco da Gama. The city was founded in 1543 and today is the headquarter of Mormugao taluka. One of the historic significance of the city is that it is in here where the Portuguese signed the “Document of Surrender”. Apart from that, Vasco is also the headquarter of Indian Navy’s Goa Naval Base, and is the place from where the Navy controls the Dabolim Airport. The Dabolim Airport is the state’s only airport which operates both commercial as well as defence flights. The good thing is that there are several good hotels in Goa located throughout the state, offering airport pick and drop services.

Goa other than owning an important trade significance, is however best known for its tourism. In fact, it is the tourism industry that prevails all other industries in Goa. Tourism is also the prime contributor to Goa’s economy. It is in the months between October to March when the city sees the footsteps of thousands of tourists filling Goa’s beaches, marketplaces, and streets. Obviously, the time period is the peak tourism season in Goa. Additionally, it is also the time duration when many of most known festivals and carnivals of Goa, such as Sunburn, New Year, Christmas, St. Xavier’s feast, IFFI, and Diwali etc. are celebrated.

When in the state a couple of places that are must visit include: Candolim Beach, Fort Aguada, Calangute Beach, Baga, Colva Beach, Anjuna Beach, The Bom Jesus Cathedral, Goa State Museum, Naval Aviation Museum, Goa Science Centre, National Institute of Oceanography, Chapora Fort, Reis Magus Fort, Bondla Wildlife Sanctuary, Arvalem Caves and Waterfalls, Mahalaxmi Temple, and Mangeshi Temple. Note that all these tourist attractions are spread throughout the state and there exist considerate distance between them. However, the good thing is that there are a couple of good 3 Star hotels in Goa that offer transportation services to these tourist attractions. Plus, one can also hire taxis, cabs, or the two wheeler taxis called scooter.

Previous Benefits Of Having An ACT Tutor In Bridgewater NJ 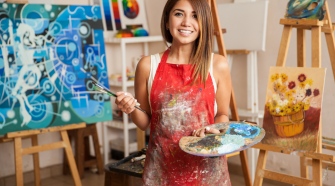 An Artist’s Career: What Development Looks Like in the Art World