Is It Safe To Smoke Hemp?

Nigeria is celebrating its 57th Year of Independence Anniversary, and millions of Nigerians are taking part in this historic event. Among the millions of people celebrating this independence is Pastor Chris through the Rhapsody of Realities.

Who is Pastor Chris:

Chris Oyakhilome is a Nigerian Christian minister, President of the Believers’ Loveworld Incorporated, known as Christ Embassy with its headquarters in Lagos. Pastor Chris is devoted to his beliefs and runs several Healing Schools, Rhapsody of Realities, featuring Love Books and an Intercity Mission for children, including Christian television programming. Pastor Chris’ television broadcasts are featured as faith healing miracles. The audiences are large, and television coverage spans over several countries and attendance totaling over 2 million people watching in one night.

Benson Idahosa University recently announced they are honoring Pastor Chris with an honorary doctorate degree in divinity which is directly related to the divinity of Christ. This honored recognition highlights his beliefs and devotion to helping and healing people. With millions of Nigerian people who follow him and his devotion combine their faith and trust in what Pastor Chris professes.

Literary Side of Pastor Chris

The pastor has written many books including:

Why the Nigerian Independence Anniversary is Worth Celebrating:

There is a lot to celebrate in this anniversary. The Nigerian people are also celebrating 18 years of unbroken democratic governance in this 57 years of independence. The people of Nigeria continue to celebrate the glory of God in their country along with the many other challenges they have overcome.

Many of the other challenges they have faced in the past 57 years include their incursion into politics, the economy and security situations that slowly improved. The people are very thankful for their constitution and the rights they have obtained. Their constitution has given the people rights and set guidelines for freedom of speech, freedom of action, and personal freedom. For all these things the people of Nigerian descent are thankful and gladly celebrate these freedoms and their belief in God and to practice their religion in freedom.

Nothings perfect, but they are headed in the right direction and millions and millions of people are happy with their freedom and Pastor Chris for his continued faith and devotion to the people Nigeria. The television broadcasts have been “God Sent” to the people all over the world.

Next PC Vs. Consoles: Which One Is Better? 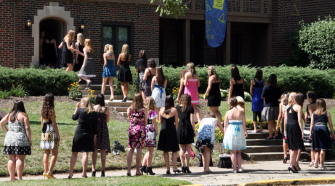 6 Reasons To Join A Fraternity/Sorority