CHOOSE WHAT SUITS YOU BEST!

Anniversary gifts can be tricky. If you watch television shows and movies you’re probably used to the old joke in which a couple agrees not to give gifts, but then both parties wind up doing it anyway. There are also traditional gifts meant for each year, for those who want to adhere to such things. The result is that most couples – particularly young once recently married – have no idea what to do for anniversaries! Should they be ignored? Should tradition dictate gift-giving? Or will you wind up in a situation like those in the comedies, in which you’re both trying to gauge the other’s efforts and act accordingly?

In all likelihood, you’re somewhere in between. A lot of couples adhere to tradition or do special things together for “significant” anniversaries, such as every fifth year. But for the years in between, you can have fun getting a little bit creative about it. And she may even appreciate it if you don’t take the conventional route. So, if that sounds like something you might be interested in, we’re helping you get the ball rolling with a few ideas for unusual alternatives to popular anniversary gifts….

Instead of jewelery…. Consider a meaningful talisman. This is a term that sometimes gets misunderstood. We hear the word “talisman” and think of bizarre ceremonial trinkets or ancient artifacts thought to possess powers. A better way to define them is that they’re basically unusual accessories or pieces of jewelry meant to symbolize specific things. Some of them can be a little tacky or over-the-top, but if you shop from a legitimate jeweler you can find a piece that will speak to your significant other and which can make for a nice alternative to just another bracelet or pair of earrings.

Instead of wine…. Consider a wine subscription. Wine doesn’t usually make it onto a list of traditional anniversary gifts to begin with, but it’s certainly not an uncommon gesture. You may well have it in your mind to stock up on some of her favorite bottles, spend more than you ordinarily would on wine, or even track down some of the same wine you drank at your wedding. These are terrific ideas, but these days the wine subscription is trendier and perhaps more useful. You can sign her up for a service that figures out her taste and sends a few bottles each month. It’s the gift that keeps on giving!

Instead of photos…. Consider giving some customized art. It’s common to want to give a beautiful framed photo or set of photos for an anniversary gift at some point. It might be a shot from your wedding, or one of you as a couple surrounded by your family. Whatever the case, it’s a nice idea, but not a very surprising one. If you want to think outside the box, consider some custom art instead. Oil paintings to order are very accessible these days, and with a service that offers them you can effectively commission a painting just for her. It’s very thoughtful and would give you a new piece to hang in your home together.

Instead of flowers…. Consider giving perennials. Flowers in a bouquet or vase are always appreciated, and frankly you can usually give them in addition to another gift. But they also die off, often rather quickly! Instead, if you know your partner enjoys plants and/or gardening, consider finding some nice alternatives like evergreen plants or perennials instead. As an added surprise you could even plant them in her garden for her. If you do not have a green thumb and are unsure about planting, this guide for hydrangea care can teach you how. They’re more lasting gifts, and can live in the yard for years to come.

Instead of a massage…. Consider setting up a couples’ spa day. It’s a fairly common gesture to give a massage coupon or something of the like on an anniversary, and it’s certainly something most women appreciate. But an anniversary is a romantic occasion, so go ahead and get in on the action! Booking a full couples’ spa experience complete with massages is a little bit pricier, but it’s a nicer and more unexpected gift.

These are just a few ideas, but hopefully they’ll help to get the ball rolling. You can be as creative as you like with any anniversary, and it always pays to give it some real thought.

Next Useful Tips To Handle The Case Of Patent Infringement 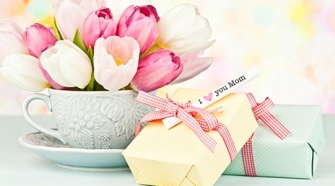 Mother’s Day Celebration Around The World