Top Reasons To Have Professionals Clean Your Gutters

PET TRAVEL LAWS IN THE UK AND OTHER EU COUNTRIES

4 Ways Your Smartphone Can Secure Your Life

Beach Attractions: TOP 11 Spanish Islands To Have A Good Time

How to Make the Most of Your Dining Space

Here at the Wachovia Center, "God Bless America" is performed live by Lauren Hart or with her accompanying a videotape by Kate Smith, who died in 1986.

"It´s just so much fun for me," Hart, wearing her lucky outfit – a black leather jacket, a Flyers T-shirt from 1974, their first Stanley Cup year, and other items – said before Game 6 on Wednesday. "Although when we were in Chicago the other day, someone said, ?You should go down to the ice and elbow the guy.´ "

"The guy" is Jim Cornelison, who sings "The Star-Spangled Banner" before Blackhawks games at the United Center. Blackhawks fans are known for their nonstop cheering during the anthem – not that anyone can hear it. Readings on a monitor placed in a penalty box by the N.H.L. during the Cup finals measured 122 decibels – a level that can cause damage to hearing at three to four minutes of sustained exposure.

The sound levels for "God Bless America" at the Wachovia Center do not quite reach that plateau – 114 decibels was the N.H.L.´s highest measurement for Games 3 and 4 – but the performance has been inspiring for the Flyers.

The Flyers went into Game 6 with a record of 88-22-4 in games at which Smith sang, either live or on a recording, including 9-1 this postseason.

Smith´s performance of the 1918 Irving Berlin song has been a Flyers talisman since the team played it for the first time in December 1969, the second season of its existence. Smith herself showed up to sing it live at the Flyers´ 1973 home opener.

She also sang it live before the 1974 game against the Boston Bruins in which the Flyers won their first Stanley Cup, and again before Game 7 of the 1975 semifinals, after the Islanders had rallied from a three-games-to-none deficit. The Islanders´ captain, Eddie Westfall, tried to trump Smith´s mojo by presenting her with a bouquet, but it didn´t work.

The Flyers won their second Cup after "God Bless America" was played later that postseason, at the last home game of the finals series against the Buffalo Sabres. That performance gave them a 44-3-1 record with Smith singing. They have not fallen off too much in the intervening Cup-less years. They were 44-19-3 going into Wednesday.

Hart, 41, is the daughter of Gene Hart, the play-by-play announcer on Flyers radio broadcasts from their inception in 1967 until 1995. Gene Hart, who died in 1999, called both Cup victories.

Lauren Hart is a professional singer and the Flyers´ full-time anthem singer since 1998. She has been voted the N.H.L.´s best anthem performer.

Hart said that having grown up with the Flyers and watching Smith´s performances, it was not difficult to synch with the videotape, even the first time she tried.

"It was very comfortable," Hart said. "We did it a half-hour before the doors opened. For me, before they even told me what to sing, it was just instinctive which part would be mine, how we would come together. I just felt it – I rehearsed it once, and that was it."

Hart pointed out her lucky psychedelic paisley socks, which stay hidden beneath her pantsuit. "These are my lucky socks that no one ever sees," she said. "I have all my little necklaces and bracelets. Nothing changes, everything stays on the same hand.

"This is a great tradition unique to hockey, the anthems in both cities, and also to honor Kate Smith this way. We take great pride in that, and I´m so lucky that it turned out to be me. Because when I was a kid, I watched many games thinking, I wish I could do that."

How Can One Maximize Profit In The Trucking Industry?

How to Eat Healthily After Natural Disaster?

6 Tips on How to Dress Casually with Style 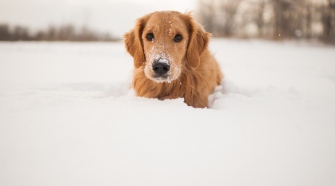 The 9 Best Foods for Golden Retrievers