Inexpensive and Stylish Ways to Furnish Your First Apartment

Why Is Shop Signage So Important?

One of the biggest components of nature that brightens up the life on earth is the birds. Birds of all sizes, from small to medium to large fill up the sky and make the world a brighter place. In the past when cities had not yet developed, the only threats the birds had were from other bigger birds of invasive nature or possibly from snakes or other animals during nesting. But then man began cutting down their trees, forcing these little birds to go hungry and even starve to death.

Cutting down of trees to make forest area cleared for the sake of farming has been a trend that had been going on for a long time. But while it was done in small numbers in few places only, in the past, now the demand for agriculture and even for cutting down trees for firewood has made these little birds homeless. They also do not get their food or get place for nesting. While few birds have survived this Damocles’ sword of extinction, few others like the Rio Utcubamba valley resident, the Marvelous Spatuletailhas been forced to become endangered and even nearing extinction.

Marvelous Spatuletailis so called because of a pair of ‘spatules’ at the end of the male birds long tail. The bright purple spatules are very pretty and the males flaunt their tales while performing the courtship dance in front of the females. This said, this brilliant looking hummingbird is found so less in number even in Rio Utcubamba Valley in North Peru that even those few birds are slowly losing their battle for life.

If something is not done at the earliest, then they may end up becoming mere specie in the museum. The little birds have become victims of deforestation and even of invasive birds and animals.

Huembo Reserve has been helping in their ways to ensure that these rare birds get saved from invasive birds. There are also few other bird conservation organizations that are working whole heartedly towards making the lives of these little birds like Marvelous Spatuletail secured. However, the first thing that people have to realize is that these pretty little birds are not getting homes to stay and therefore, they are dying out in large numbers. Similarly, with trees being cut down in large numbers, these little highland birds are forced to move to villages or towards human civilization to scrounge for food.

This pitiful condition of the birds should be enough for the humans to realize that soon a time will come when more or less all of the birds would be driven out of the forests and their homes. Unable to meet their dietary supplement in the forests, these birds entering cities or villages is not a good sign. Considering these facts, it is essential that people who care about their future should start doing their bit for the environment soon. Only then, will there be a chance for these birds to survive and thrive.

Next Foods That Will Help You Get Skinny Fingers

That Beautiful Old House May Harbour Some Secrets 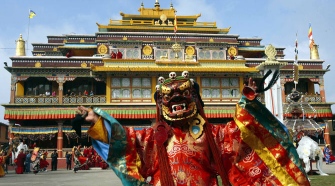 Flora and Fauna Of Sikkim